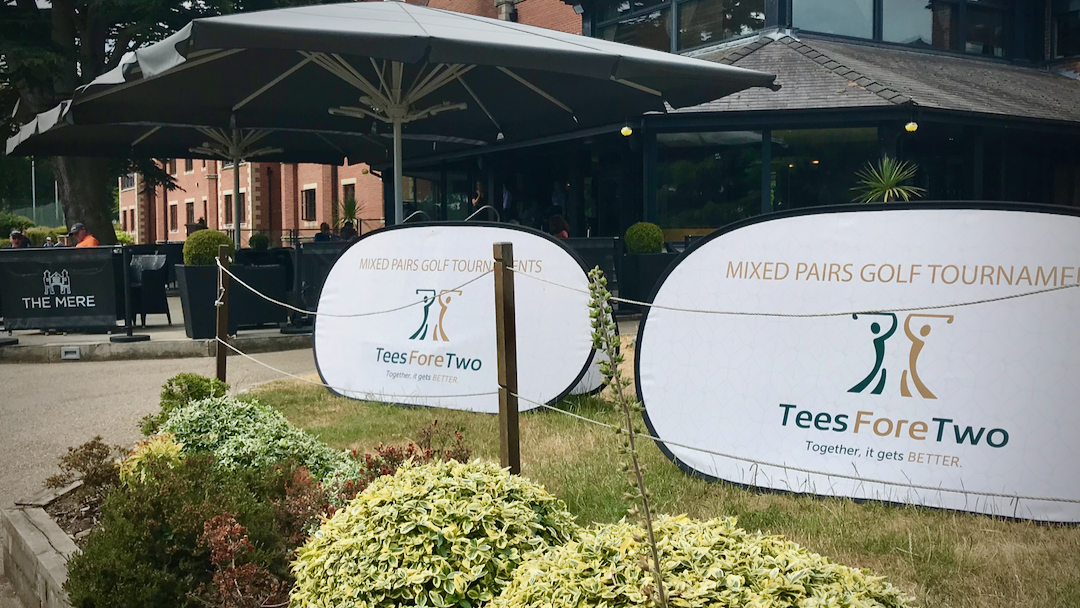 Ten couples took to the fairways for three scorching hot days competing for a slice of Tees Fore Two history.

The tournament commenced in high spirits after England knocked out Sweden in the quarterfinals of the World Cup the previous day. Even the prospect of being told there were 104 bunkers on the course didn’t daunt these avid golfers. 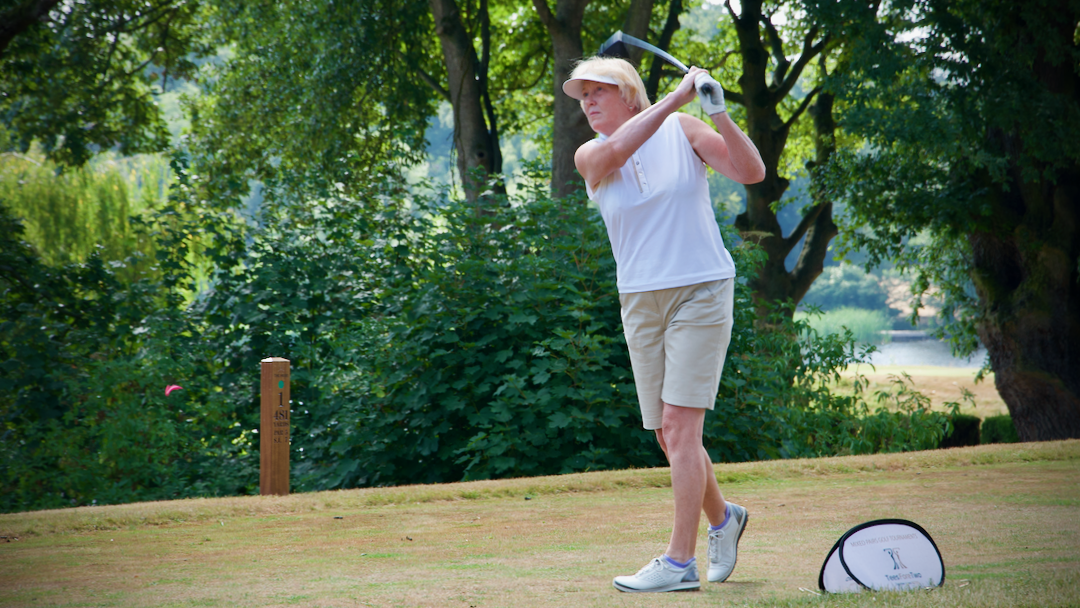 Most couples opted for a buggy for the day, taking advantage of the shade it offered as well as the breeze it provided between shots… Smart move when the temperature topped 28 degrees. 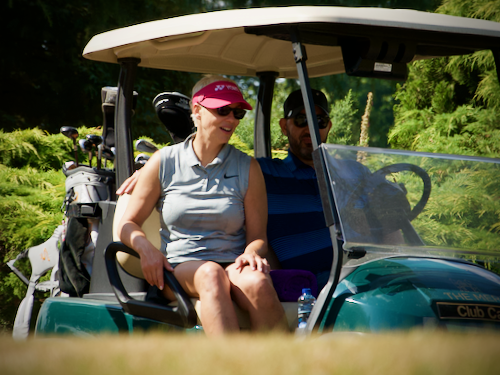 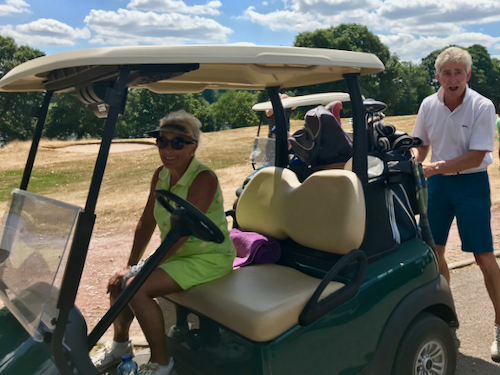 The dry fairways gave up a lot of yardage to all competitors so it was tough to figure out when and where the ball was going to stop. Hitting the ball straight was key as well as avoiding the numerous bunkers dotted around each hole. 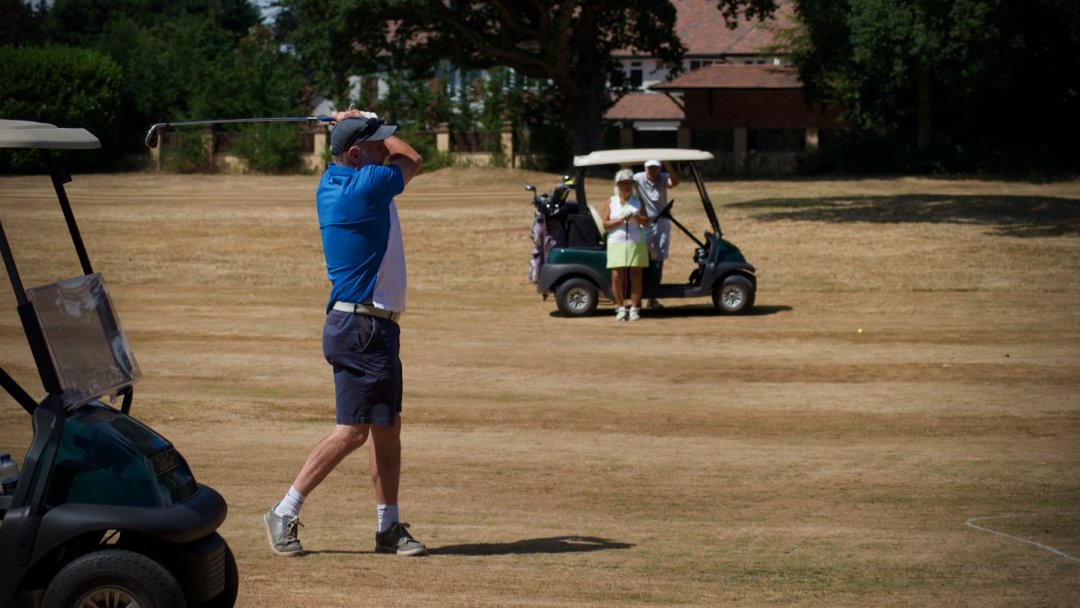 After the round of golf in relentless heat, two couples had edged in front but not too far behind them tied third with 39 points were Ted & Sarah Rees and Peter & Josie Sheridan. Joint leaders sharing top spot for the first day’s proceedings posting solid cards of 41 points were Frank Gregory & Tina Harwood and Peter & Gillian Lamming. 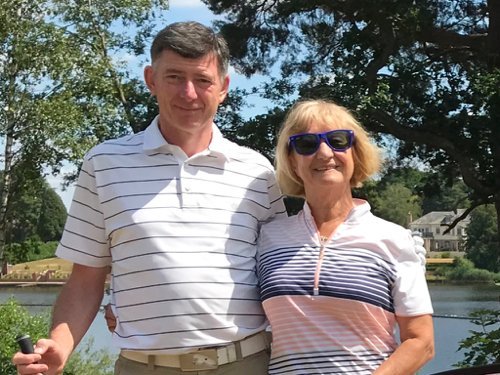 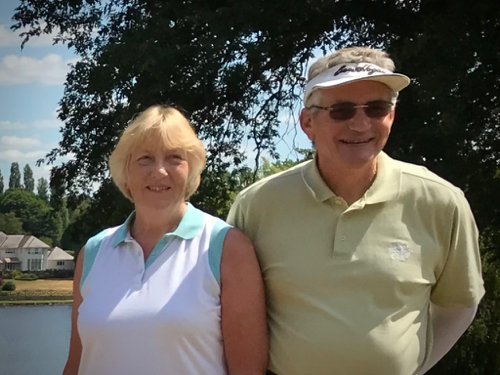 The sun was cracking the flags again but the heat felt much kinder. More competitors used the unique driving range today, maybe because it was one of the few places in the shade apart from the clubhouse. It’s the only place I know where the range is the lake and you’re encouraged to hit floating balls into the middle of it. It’s great fun too. 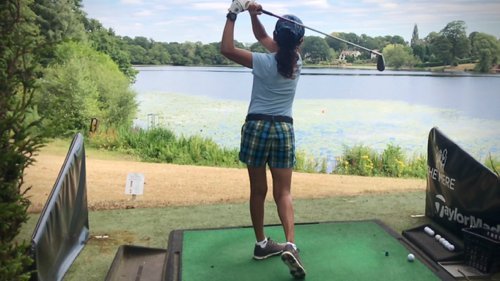 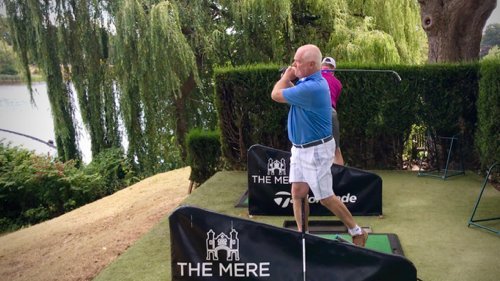 It was definately moving day today at The Mere, with yesterday’s leaders turning in mediocre performances. Ted & Sarah and Peter & Josie kept up the pressure with two consistent rounds of 38 points each to tie in third place. Joe & Marian moved through the ranks with their 40 point card to take second spot but just beating them by one point, which made the birdy on the 18th all the more relevant were Mark & Judith Heffer. 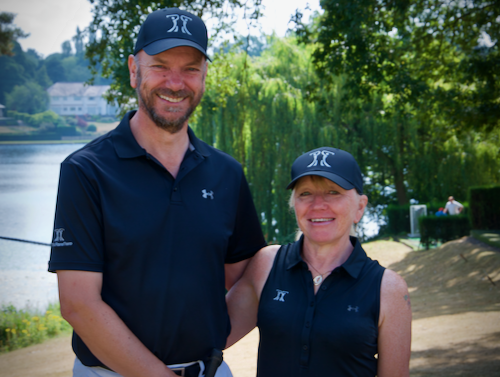 After 36 holes played, three couples were tied on 77 points, Ted & Sarah, Peter & Josie and Mark & Judith. Tied in fourth place were yesterday’s leaders on 74 points after both posting cards of 33 points.

Egyptian ducklings would take over our first Tee box this morning under the watchful eye of their parents, so we were thankful that our starter, Steve from The Mere laid his life on the line and shooed them off the first Tee so Ken & Barbara Paterson and Graeme & Carole Mackay could lead proceedings for our final round of the tournament. 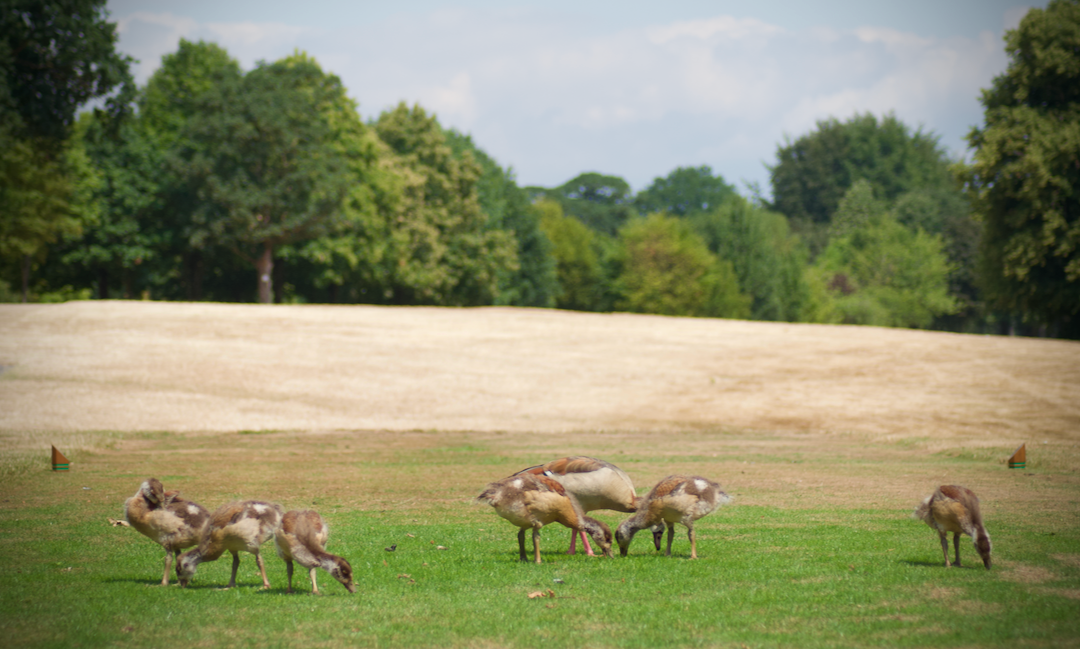 Unfortunately, as soon as the couples were heading off down the fairway the persistent ducklings returned. They seemed to love feeding on the lush part of the Tee box, a welcome distraction at least from the ever increasing heat.

Second off was Mike & Dot Simpson and Ayman & Victoria Ileiwat followed by Peter & Gillian and Frank & Tina. Next up were Joe & Marian and Mark & Judith, last to go out were Ted & Sarah and Peter & Josie.

Only five points separated the last three groups that teed off…

Another blistering day unfolded but Michelle and Lee were at hand again and kept everyone hydrated throughout the day with a choice of Pims, lager or water. More takers for the water today and everyone seemed more focused. Were their eyes on the prize maybe?

Quick Stat: Every player in the tournament has been in at least one bunker on every day that they have played… That’s a lot of raking! 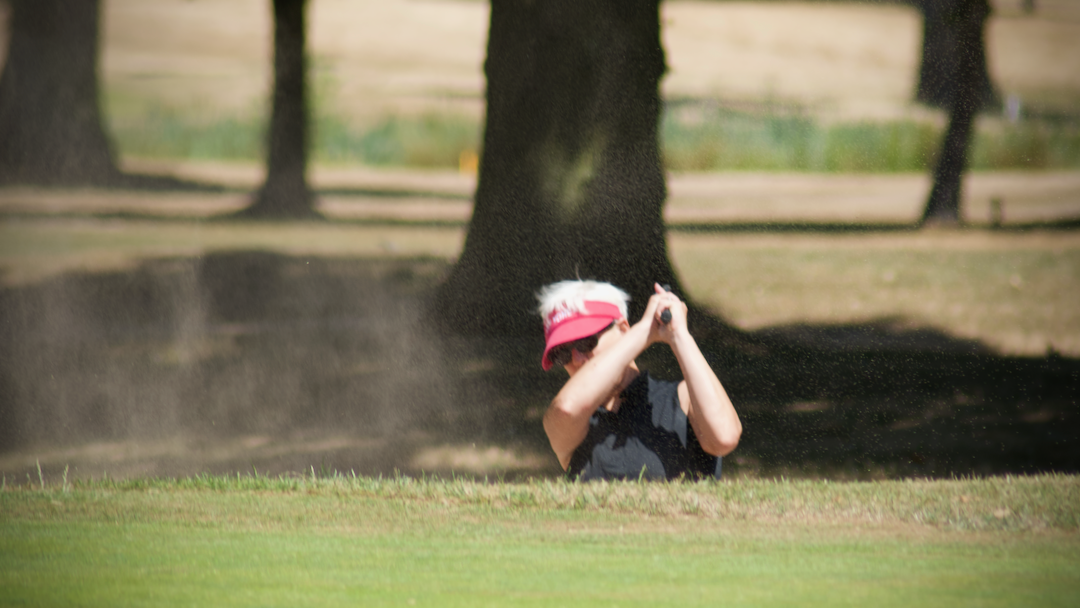 As the final cards came in we had a three-way tie for second place for the day. Scoring 36 points were Ted & Sarah, Graeme & Carole and Mark & Judith but coming home with the best score of the day with 41 points were Joe & Marian.

So with 54 holes played over three extremely hot days the final results couldn’t have been any closer. A tie at the top between three couples on 113 points each. Coming third on count back were Mark & Judith with a back nine of 17 points. Runners-up were Ted & Sarah with a back nine of 18 points.

Winning our inaugural event at The Mere Golf Resort & Spa 2018 were Joe & Marian with their 41 point card for the day.

We hope you to see you all at another Tees Fore Two tournament.

Together, it gets BETTER. 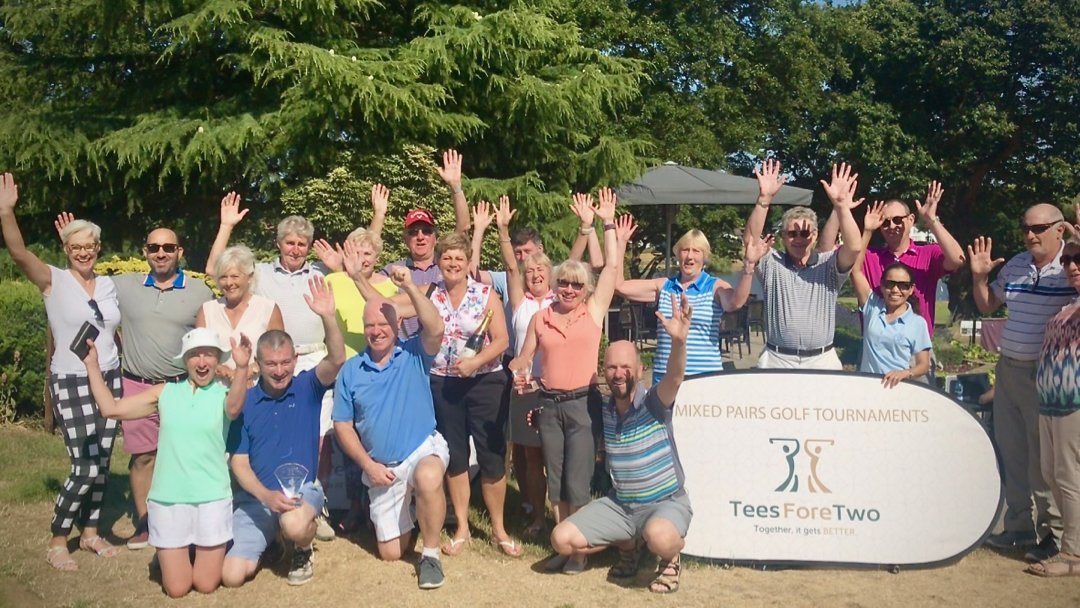